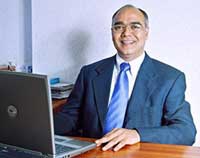 S Padmanabhan, group CHRO, Tata Group, has been appointed as the chairman of Tata Power, in place of Cyrus Mistry, who resigned last month. In November 2016, he was appointed as Tata group’s CHRO following the exit of NS Rajan.

Tata Power brought back Padmanabhan in December, as an additional director on the board. Padmanabhan was the executive director of operations at the company until 2014.

Padmanabhan has been with the Tata Group for 34 years, out of which 26 were with Tata Consultancy Services.

In a press statement earlier, the company had said during his stint with Tata Power between 2008 and 2014, he was ‘responsible for the profitable and sustainable operations of all thermal and hydro generation plants across India and transmission and distribution systems in Mumbai.’

Tata Power had called for an extra ordinary general meeting of shareholders to discuss the removal of Mistry as the chairman on December 26, but he rendered his resignation before that on December 19.