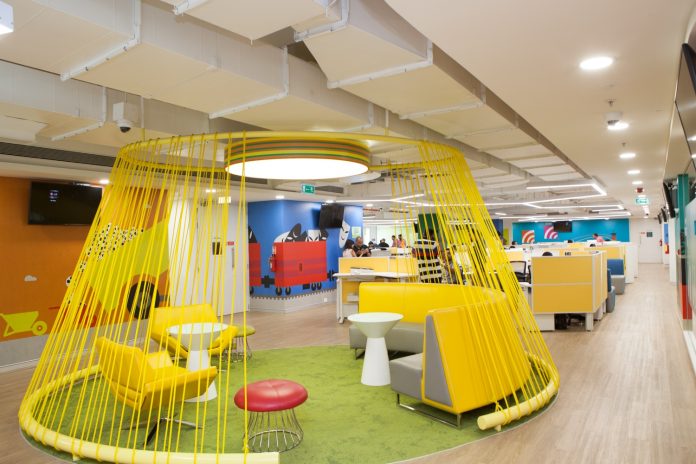 The new address in Mumbai boasts of collaborative workspaces instead of conventional cabins, in line with the belief of ‘#OneTogether’.

Viacom18 Media has got itself a new office in Mumbai to accommodate its rapidly increasing workforce. The media and entertainment company’s new office, which is located close to the company headquarters in Vile Parle East, houses collaborative workspaces, instead of conventional cabins. It is in line with the company’s belief that growth is driven by an inclusive culture that encourages innovation through engaged collaboration and the new office is designed as a testament to this belief.

Unified under the concept of ‘#OneTogether’, each floor of the six-storey building has a customised design theme, representative of brand Viacom18 as well as the specific brand housed on that floor. The idea behind the design of the office premise is simple—it is a playground for different brands, with their own distinct identity for the end consumer, that work under the banner of Viacom18.

Explaining the idea behind #OneTogether, Sudhanshu Vats, group CEO, Viacom18 says, “While designing the new office, we wanted to encapsulate the diverse ethos of the individual brands into the singular identity of the mother brand. The optimal way to establish this was to create a theme that celebrated and unified the two opposing identities—the individual and the universal—OneTogether.”

He further shares that while each floor bears an individual brand’s footprint, meeting rooms, hot desks, collaboration spaces et al, are universal properties and can be used by teams from the company’s other offices in the city as well. Furthermore, an open office space design has been used to anchor this theme throughout the premises.

Following the writ of ‘#OneTogether’ the new office has sculpted installations and graffiti walls to funky-stickered glass partitions, and quirk and intrigue is woven throughout the new office. For instance, as one lands on the first floor, it shows four human figures sharing a pair of headphones, this is the floor that houses MTV. The second floor installation shows four human figures under none other than Charlie Chaplin’s hat. Apt, for the floor that houses the Comedy Central teams. In this way, the design reflects the different brands, each unique, each iconic in its category.

In addition, an extensive internal communication campaign on the theme of ‘#OneTogether’ was conceptualised and executed over a period of four weeks, across the Mumbai offices to create excitement over the move to the new address. The campaign gave a sneak peek into the facilities for both—those moving to the new building as well as employees, who remained at the headquarters but could use the facilities in the new building. It involved using various media for communication, through installations, creative mailers and giveaways that created a buzz and anticipation for the move.

Some of the other unique features of the workspace include:

– An open plan encouraging conversation and collaboration amongst employees. The new office dispenses away with cabins completely (even for the leadership team)

– A good balance of spaces for solo thinking with special ‘think pods.’ These are anti-social corners for private conversations, and even a large terrace and patio to allow for private undisturbed time.

– 37 meeting rooms to allow for brainstorming on different ideas. These can be used by employees across offices.

– Standing workstations as well as a fitness & recreation room, and in-house doctor’s room

– A ‘Jam Room’ for the musically inclined, massage chairs and even a game room!

– A cafeteria equipped with a live kitchen and extensive menu

The goal of the new workspace design, is to offer art and expression through spaces that surround the employees and make a long hard day at work pleasing to the eye and exciting to be immersed in. Viacom18’s creative culture is reflected throughout the new office, and it is an apt space for a powerhouse of diverse talent and energy.