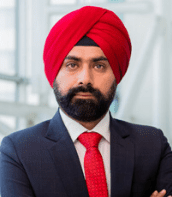 Paramjit Singh Nayyar has joined Bharti AXA General Insurance, as the CHRO and member of the management committee on July 7, after a three-year stint at HDFC ERGO Health Insurance. His last working day at HDFC ERGO was July 6.

Speaking to HRKahta, Nayyar comments, “Insurance is a sunrise industry and is set to grow manifold in the coming few years. This industry also has a unique and noble objective of driving health risk coverage, which has become so much more important given the COVID pandemic.”

Talking about his immediate mandate at Bharti AXA, Nayyar adds, “My immediate priorities include developing HR strategy to provide people with the capability to propel the organisation’s ambitious growth plans in the coming years.”

“Building the culture of meritocracy, creating a strong employer brand and transforming employee experience by leveraging technology are the key pivots of my strategy,” he elucidates.

Nayyar brings with him two decades of experience of scaling up businesses in diverse industries, such as BFSI, telecom, retail and healthcare. Out of these 20 years, he has spent the last 12 serving in HR leadership roles, including head -TA HRBP and CHRO among others.

Having begun his professional journey with a two-month summer internship at KEC International in 1999, Nayyar went on to join the Aditya Birla Group Grasim Industries as an HR officer. In less than a year, he picked up the basics of IR and HR at the fabric manufacturing unit, by supporting the leadership in IR and in other functions, such as performance management as well as learning and development.

In 2000, he joined Triveni Engineering and Industries for three years, as the HR business partner for the turbine and gear sets manufacturing units at Bangalore, Mysore and Vijayawada.

After Triveni, he joined Bharti Airtel in 2003 as the regional head of talent acquisition and HR operations for Madhya Pradesh and Chattisgarh, while based out of Indore. Over the years, he rose to become the head – HR and VP for India and South Asia. His 12-year long stint at Airtel was the longest in his professional career.

In 2016 Nayyar left Airtel to join VLCC as the global HR head, reporting to the managing director. There, he was tasked with setting up a centralised HR function for the three divisions of the Company. He served at VLCC for more than a year before moving on to HDFC ERGO Health in 2017.

A life sciences student from Kendriya Vidyalaya, Nayyar earned his MBA in HRM from Jiwaji University, in 2000.

Shell elevates Tarun NP Varma as VP – HR, for its...