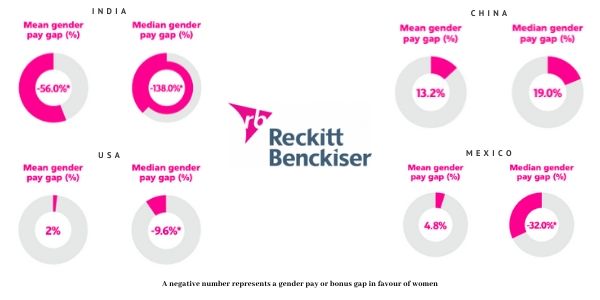 The Indian region of Reckitt Benckiser (RB) has outperformed other regions in terms of achieving gender pay gap.

“Diversity and Inclusion is a business imperative and not just a moral or compliance imperative. Our RB internal colleague profile needs to reflect our consumer profile, and the profile of the various markets we operate in”

At RB India, a significant portion of the men in the workforce work in field sales and factories. Not only are these roles scattered across the length and breadth of the country, the pay for these roles is lower. At the corporate head office and regional offices, on the other hand, there are more women. These offices are located in tier-1 cities of India, and also pay higher wages.

Compare this with China, where 74 per cent of the factory workers are women and in these roles demand low wages.

Globally, RB has set itself a target of doubling the number of women in senior-management roles, from 20 per cent in 2016, to 40 per cent by 2022. Last year, women held about 26 per cent of the senior management roles in the Company.

However, in the US, RB agrees that there is still lot to be  done in getting more women into senior roles. “There is still much progress to be made in having more females in senior-level roles. There will be a concerted effort in the coming year to make greater progress on this through ensuring our processes and decision-making are fit-for-purpose to drive this change,” says the statement.

Ranjay Radhakrishnan, Global CHRO, RB, says, “Diversity and Inclusion is a business imperative and not just a moral or compliance imperative. Our RB internal colleague profile needs to reflect our consumer profile, and the profile of the various markets we operate in.”

RB India recently-launched a programme, Rediscover, that offers an opportunity to women on career breaks, to return to active professional life. The programme is open to women outside the organisation too, who are keen to work in an inclusive environment, where they will be given a chance to comfortably settle in after a sabbatical.

Under the initiative, women are given six months to perform as interns, during which time they are able to refresh their technical knowledge, regain their confidence and update their skills. Women take career breaks for many reasons. They are given support in the form of mentoring and onboarding as well. Whenever opportunities come up, these interns are given the first right to apply.

There is also an initiative to help new mothers who have to travel for work. Till the child turns one, the travel for the person taking care of the child and accompanying the mother during working hours is paid for by the Company.

With measures like these in place, RB hopes to become an employer of choice for women seeking a supportive work environment.

While the concept of equal pay is commonly talked about by Indian professionals, gender pay is not that frequently discussed. By being transparent about its gender pay performance and reporting voluntarily, RB hopes to find favour with not just existing employees, but potential recruits as well.