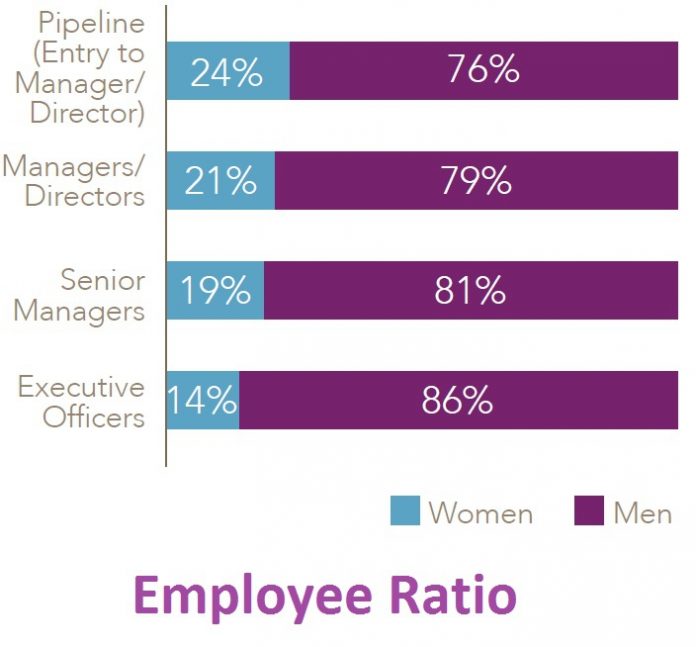 It is a positive trend, that an increasing number of women are joining the workforce in India. However, there is still a wide gap to be bridged before Indian companies can claim to be fully gender diversified.

As per a study by the non-profit organisation, Catalyst, which works to expand opportunities for women and business, and improve the ratio between men and women employees at the entry level, the Indian workforce is still at 76:24. As one moves upwards on the hierarchy, the percentage of women employees starts decreasing.

Unfortunately, the true blue Indian companies are still lagging behind in the India operations of MNCs. The home-grown companies have a gender diversity of 21 per cent at the entry level, while for the Indian subsidiaries of global companies, the figure is 25 per cent.

There is parity at the manager level for both the India headquartered companies and Indian subsidiaries of MNCs, with both employing 21 per cent women employees.

However, there are more women top bosses in MNCs in India, than the true blue Indian companies.

It is estimated that India is likely to add 65 million jobs in the next decade, and to meet this demand for talent, India Inc. will have to invest more in hiring women.

It is true that India Inc. has realised the importance of a diversified and inclusive (D&I) workforce and it is also implementing ground-level changes to establish a foundation for their D&I efforts.

Some of these initial approaches include broad efforts to attract women into the workplace and ensure that women have safe and comfortable work environments once they are hired. These measures include safe transportation options for women employees, who work late, and anti-sexual harassment training.

The survey also revealed that more than 86 per cent of the Indian companies practice recruiting strategies designed to help increase gender diversity.

While such measures get women into organisations and ensure a safe work environment once there, what India Inc. needs to do is address the systemic, culturally ingrained issues that affect women’s workplace experiences and career trajectories. These—including gender bias, family support role, and shifting demographics—continue to demand more attention and focussed effort.

To get more women to be part of its workforce, India Inc. needs to prepare and help women employees face the complexities of sociocultural challenges, including social expectations and stereotypes about gender roles, complicated clashes between modernisation and tradition, and impact of globalisation.

To help women integrate work and life demands, such as raising children while pursuing a career, organisations will have to get rid of some rigid rules, be it promoting telecommuting or flexible work hours.

In fact, the MNCs are better prepared than home-grown companies in this regard. Around 93 per cent of the MNCs reported having a formal written flexible work policy compared to just 67 per cent of India-headquartered companies.

The irony is that despite flexible work arrangement (FWA) being applicable, it’s still not widely practised. In fact, most of these programmes are poorly tracked among surveyed organisations.

For instance, telecommuting, which was offered by around 86 per cent of organisations, was tracked by only by 39 per cent of them. This raises questions about the seriousness with which organisations look at employees’ work-life effectiveness.

One way to create a flexible culture is to review how and which aspect of FWAs employees are using.

The study indicates that majority of organisations are offering maternity benefits beyond the legally-mandated days, and the percentage of employees returning to their jobs is also as high as 85 per cent. However, the issues of long-term success and career sustainability still need to be addressed to fully support women’s ability to effectively integrate work-life needs.

For instance, round 48 per cent of the surveyed companies did not offer any family care options, such as on-site/near-site child care, emergency child care, referral and support services for children or elder care.

Besides, around 41 per cent of organisations still lack a formal, standardised approach to determine appropriate performance review ratings for post-leave employees whereas to have 100 per cent inclusive culture, organisations need to reintegrate these returning employees using fair performance-management practices.

Moreover, just 20 per cent of the organisations in India with such programmes track advancement by gender—despite the fact that the most commonly stated purpose of these programmes, especially for women, is advancement.

The culture of diversity should be woven into all levels of an organisation, from the executive, all the way down to the entry.

84% employees will return to office to be able to socialise...