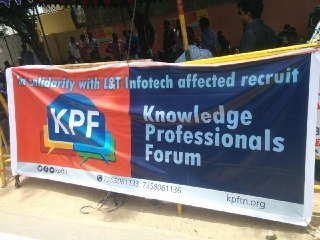 L&T Infotech has cancelled the offer letters of around 1000 students who are now protesting the move along with Knowledge Professionals Forum.

Soon after the tussle between IIM-Ahmedabad and Flipkart over the delayed joining of 18 students from the institute, L&T InfoTech has got into a similar situation.

The IT major has cancelled the offer letters of around 1,500 students who are now protesting the move along with Knowledge Professionals Forum (KPF) – a welfare and support organisation for IT and ITeS employees.

According to KPF, the company had recruited 5800 graduates for employment from various colleges across the country through its campus recruitment drive in between September and November of 2014. The selected candidates were given Offer of Intent (OoI) which defined the terms and conditions of employment and compensation.

However, only around 3,500 of them were on-boarded while the others were issued tentative joining dates. The joining dates of the remaining candidates were revised periodically until March 2016.

In April, the wait-listed candidates received an e-mail about an online assessment test to be conducted by the company with an assurance of issuing final joining date after the test.

KPI says, “After 18 months of waiting the recruits appeared for the assessment test with hope to get the job. But, a week after the online test, more than 1000 recruits have received rejection e-mail, which states that their offer of intent is cancelled due to their poor performance in the online test.

The students’ point of contention is why were they asked to repeat the assessment process while they had already cleared several rounds of assessments and interviews earlier itself.

Most students who appeared for the second assessment complained that the questions were very difficult and beyond their knowledge level.

Once again the same issues – of students having to worry about repaying the loans, facing demotivation and losing out on the chance for a better campus placement – have mounted and have forced them to raise a voice against such behaviour from the organisations.

While the future of these students seems to dwindle, the question is – whether the organisations realise what impact this kind of a decision has on the talent and on their own repute as an employer.

Around 70 of these recruits have now gone on hunger strike in Chennai demanding justice against cancellation of Offer of Intent.

Several attempts to reach out to the officials at L&T InfoTech went futile.

According to other media reports, the company had cited changes in business requirements as the reason for delaying the joining.